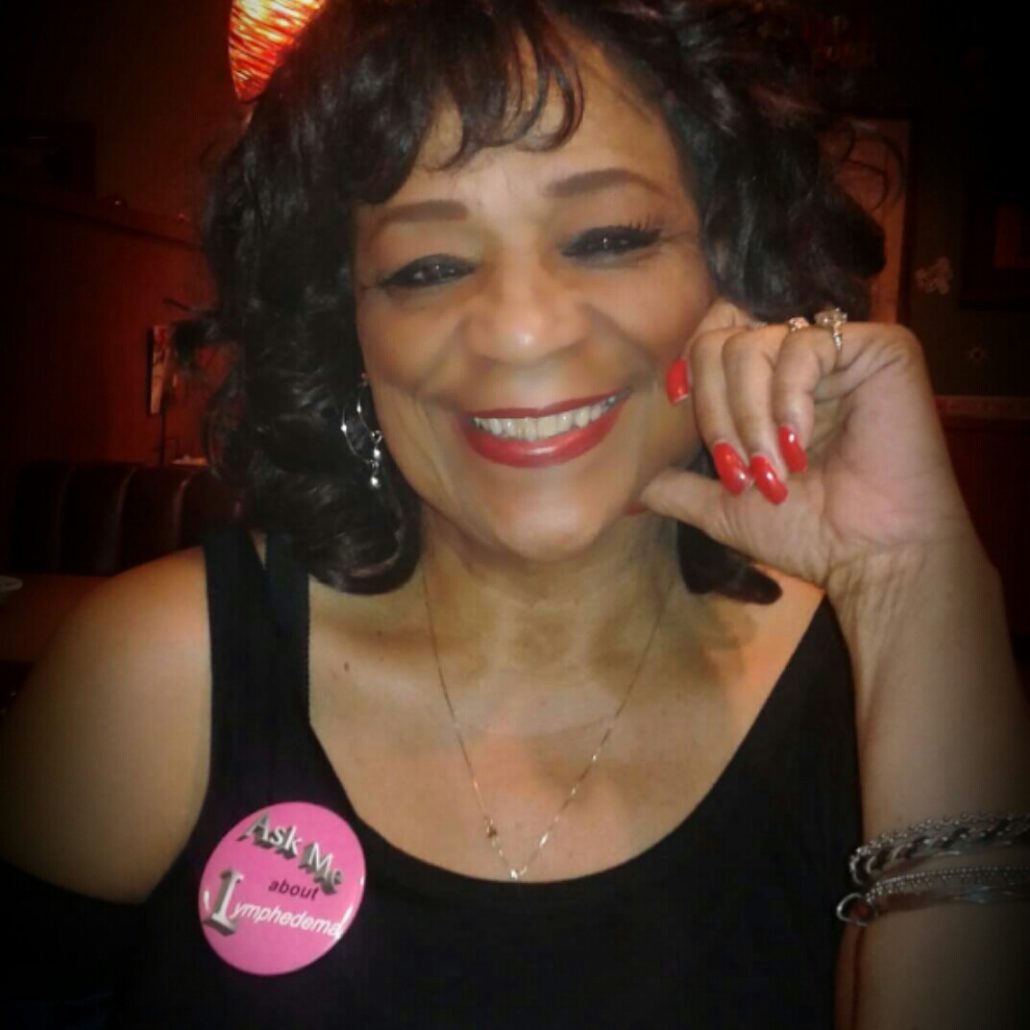 Meet Cynthia “MsCjay” Judge
I have survived breast cancer twice, in 1979 at age 30 years old and 1993 at age 44 years old. From the photos taken of me in the early 80’s I can see that I had Lymphedema, but was not aware of it. In 1990, eleven years after my first mastectomy my right hand became swollen. I had no idea what caused the swelling, and a visit with my surgeon was no real help. He asked if I had cut myself and put me on a course of antibiotics. I instinctively bought an ace bandage to easy the pain. The swelling was minimal and didn’t have a big affect on my life, I went on as usual.

There were times when the hand became more swollen and each doctor’s visit ended with prescriptions for water pills and told to get a sleeve. No other form of treatment was recommended. In January of 2007 I suffered a bout of cellulitis, the result of a broken acrylic fingernail. I didn’t have health insurance so delayed going to the doctor, until I developed red specs on my arm. I immediately went to Quick Care, where I was told, had I waited one more day I would have been hospitalized. I was given a shot and a rigorous course of antibiotics; however the swelling in my hand and arm had grown tremendously.

On October 23, 2009 I woke up unable to get out of bed. My head was pounding, my hand and arm were painful and hot, I was unable to walk and I couldn’t swallow, so could not eat. I was terrified. I called my niece and asked that she come over and help me as I could not get out of bed. Once again, I wondered if I had cancer again and wondered if I was dying. I was in bed for a week.

My first visit with the Lymphatic Center of Las Vegas was on November 1, 2009. I met Dr. Richard Hodnett who took one look and me and began treating me right away. He explained in detail what was going on with my Lymphedema and how MLD (Manual Lymphatic Drainage) along with bandaging would help me. I was filled with so much emotion that I began to cry. I finally found a place of healing, it was like being born again.

I was in treatment for 3 months 3 times a week. I was compliant and did everything that I was instructed to do. I learned so much about the lymphatic system and how crucial it is to our overall health. I also learned how many physicians are uneducated when it comes to treating this ailment.

As a result of treatment my arm was reduced by 15cm (almost 6 inches) and I am now wearing my lymphatic compression sleeve and glove. I faithfully wear them every day and make sure that I do my lymphatic exercises. In fact, my black sleeve and glove are now my fashion statement and trade mark. I’ve regained the self-esteem that I lost before treatment. It’s wonderful to feel good about myself again.

On October 19, 2011 during Breast Cancer Awareness Month, I received a proclamation from the Mayor and City Council of Las Vegas proclaiming that day as “Lymphedema Awareness Day.” The proclamation was in fact an endorsement of the bill and a proud day for me. I was a member of the group of advocates who went to Washington DC to lobby  the Lymphedema Treatment Act with Senators and Congressional members on Capitol Hill.

I am also the Co-host of the Lymphedema Mavens Radio Podcast with my co-host Coach Christine a breast cancer survivor with Lymphedema. We are giving voice to the Lymphedema community. I am on a mission to help bring awareness to Lymphedema.

I have Lymphedema, it doesn’t have me!

Welcome to the official homepage of the Lymphedema Mavens podcast